I was born in the Philippine Islands before World War II. I spent the war years, with my family, in several Japanese Internment camps. My memoir of those years was published December 29, 2016, by Archway Publications titled Only by the Grace of God: One family’s story of survival during World War II as prisoners of war in the Philippines. Pamela J. Brink, Robert A. Brink, John W. Brink. The book is available on Amazon.com.

After the war, I grew up in Whittier, a small Quaker college town in Southern California surrounded by orange and avocado groves. I studied nursing at Mount Saint Mary’s College in Los Angeles; received my master’s degree in psychiatric nursing from The Catholic University of America in Washington, DC; and, my PhD in cultural anthropology from Boston University. 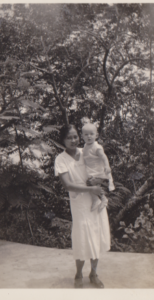 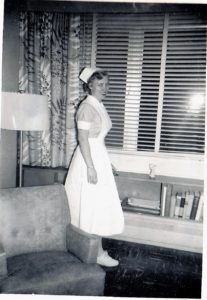 I have worked as an evening clinical nurse at St. John’s Hospital in Santa Monica, California; as a psychiatric nurse at Norwalk State Mental Hospital in Norwalk, California; the Brentwood VA hospital in Los Angeles, California, as an office nurse for Erick T. Yuhl, M.D., a neurosurgeon, in Santa Monica, California, and as a head nurse of the admissions unit on the psychiatric pavilion at the University of Cincinnati hospital, Cincinnati, Ohio. I taught psychiatric nursing as an instructor at the University of Cincinnati School of Nursing and as an assistant professor at the UCLA School of Nursing.

After receiving my PhD, I held joint appointments in nursing and anthropology at UCLA and later at the University of Alberta. In between, I was on the nursing faculty at the University of Iowa. It was at UCLA that I met Marilynn J. Wood, RN, Dr.P.H. and we collaborated on two books: Basic Steps in Planning Nursing Research followed by its sequel, Advanced Design in Nursing Research.

Also, while I was at UCLA, I taught an elective graduate nursing course called “Nursing in other Cultures”. I wanted to introduce anthropology to nursing. After the course was over, I pulled the required readings together into a book called “Transcultural Nursing: A Book of Readings.”

When I was still at UCLA, I was approached by a book printing company (KNI) that was interested in expanding into publishing. The owner asked me if I would be interested in creating a nursing journal. They didn’t care what kind. I immediately accepted and suggested a nursing research journal. With their approval, I sought out collaborators from colleagues I had met over the years with the Western Conference for Higher Education in Nursing. They too were enthusiastic. Together, we created The Western Journal of Nursing Research. The early years were a learning experience and expensive as I paid for much of the expenses other than the actual production. It was not until I was at the University of Iowa that KNI sold the journal to Sage Publications. There I met Terry Hendrix, a Sage Editor, who was the most supportive editor I ever worked with. Almost thirty years later, I turned over the editorship to someone else. 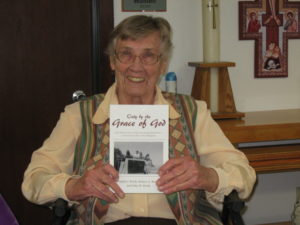 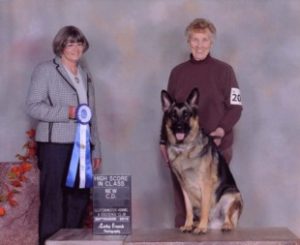 As a clinical nurse, as a patient and as an instructor in clinical nursing, I was often struck by the difference in the treatment of certain patients by physicians, nurses and nursing staff. Periodically, patients were ignored, bossed around, and given poor care. Some patients were treated differently from others. I wondered why. So I wrote a book about it called “Patientology.”

I have a passion for German Shepherd Dogs. I became a breeder, under the name Vonderbrink Kennels, and showed my dogs in both obedience and conformation. High points included a Best in Show for one and Best in Puppy Show for two.

I put obedience and rally titles on most of my dogs and managed to get high in class but never high in trial. 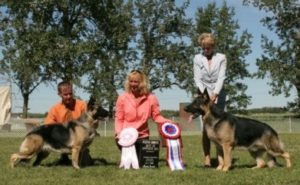 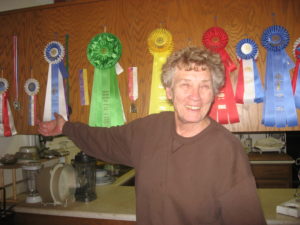 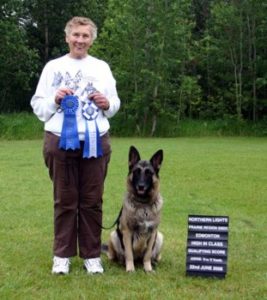 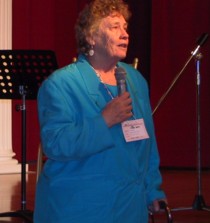 Ever since my war experiences, I have had trouble controlling my weight until I discovered the low carbohydrate diet. I became a devoted convert. This picture was taken when I was a keynote speaker at a nursing research conference in Japan in 2005. This is my “before” low carb dieting picture.

And here I am two years later in my ‘having reached goal’ picture with Kristie who achieved her one and only obedience leg and high in class. She was the only one who showed up for the novice competition!

And on the same weekend, receiving the highest obedience award of the weekend. I am with Kristie’s half sister, Johanna. It was a rainy and windy day! 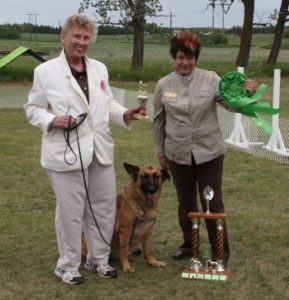